Orchideopexy is the operation to move an undescended testicle into the scrotum was termed as orchiopexy or orchidopexy. It was generally done to the babies who are 9 to 15 months old. In most of the cases, a pediatric doctor or a special

ist who will treats urinary problems in the children (pediatric urologist) will do this surgery.

Why is Orchidopexy done? 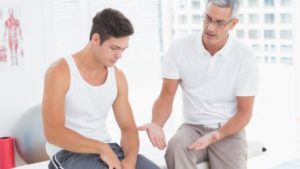 Orchiopexy is done in older boys & rarely in teens & adult men who have undescended testicles. Based on the location of the testicle, 1 o

r 2 small cuts or incisions were made in the groin, the scrotum, or the abdomen which allows the doctor to reach the testicle & move it to the scrotum. Ocassionally another surgical treatment was called as laparoscopy was used to move the undescended testicles when they were located high in the abdomen or in the inguinal canal. In both kinds of orchiopexy, general anesthesia will be performed before starting the procedure. Generally only one operation was needed. But in some certain cases the testicles were located in the abdomen, orchiopexy will be required 2 separate surgery that will be done several months apart.

For any queries fill in our enquiry form